Welcome To Bricktok: Tradies Are The New Tiktok Trend! 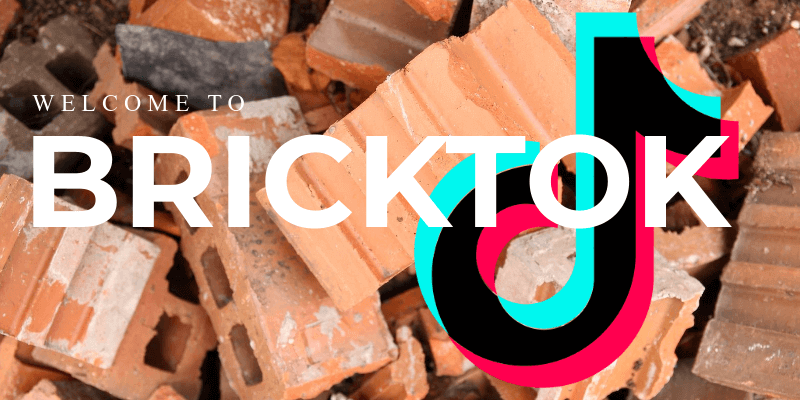 Welcome To Bricktok: Tradies Are The New Tiktok Trend!

The newest on trade trend? TikTok!

There's nothing better than the satisfaction of doing a great job- and it looks like millions of people outside of the trades want to watch too. Builders, plasterers and joiners are all trending on Tiktok! Tradespeople from all different industries have been sharing their skills on the new up-and-coming social media platform, TikTok, with many amassing millions of views.

Everyones been talking about TikTok- but what is it? TikTok is the new video-sharing social media that's only been getting more popular in lockdown. It’s a social media platform solely focussed around short video content. Users can upload and easily edit videos, synch them to music and then share! On its website, TikTok says its mission is “to capture and present the world’s creativity, knowledge, and precious life moments, directly from the mobile phone.’ Known for its dance challenges and popularity among gen Z, TikTok is now gaining traction across new audiences, including builders.

Unlike many other social media platforms, TikTok prioritises up and coming users in its algorithm. This means that often the hashtags or backing track used are more important factors for clocking up views than simply who made them.

TikTok is primarily organised not by the accounts you follow but by the For You Page- where TikTok’s algorithm will continually play you videos it thinks you will enjoy. The ‘For You Page’ or ‘FYP’ is the front page of TikTok. Here, the app selects videos based on what you've previously interacted with. The majority of TikTok users spend most of their time on this page.

With a young workforce who aren't shy of joking about, it's no surprise that TikTok has been popular in the trades- but now they aren't just users- they're becoming sought after creators! Users from across the world have been watching countless videos of floors being sanded and refinished, bricks being laid and concrete getting mixed. From doing their everyday job with a splash of flair to explaining the processes that the customer doesn't usually see- here’s some of the most popular accounts trending at the moment :

Maybe unsurprisingly, this impressive video has 5.7 million views!! With only 5 videos, this account has amassed 26.2k followers, 702.6k combined likes across their videos and a whopping combined 6221500 views.

It’s not just brickies on Tiktok. This floor refinishing company has been uploading process videos since October last year and have amassed 6027 Followers and over 30.6KLikes, with each of their videos gaining thousands of views; this video alone has 699.1k views. Followers comment with questions on the process and share tips with each other.

This UK based account has got 291.9k followers to date, with multiple videos garnering millions of views. This video has had a 645.1K likes 2914 comments to date. Many commenters have praised the satisfyingly clean work. The cleats on his shoes have become the real star here though, leading many to believe he's a magician! In the words of one commenter: ‘Ok i am quitting my job to learn this trade.’

Join the challenge, ##buildersgottalent or send us your best talent via our bio! ##onthetools ##uk ##viral ##construction ##foryou ##challenge ##skills

♬ original sound - On The Tools

It’s not all serious- this account showcases builders tricks and talents while the lark about on site. They might not get quite as many views as the rest, but it is certainly worth a laugh!

When it comes to TikTok though, hashtags are king!

To give you a scope of just how popular some of these hashtags are we took the biggest related hashtags and organised them in size per millions of views. The bigger the dot, the more used the hashtag is!

Some of these hashtags are so giant that they eclipse the others- here’s what that graph looks like again when we take out hashtags that aren't specific to just the trades:

While it's clear that construction is hugely more popular, even the smallest of these dots is still 2.1 million views. It might not be watching paint dry, but it turns millions of people want to watch floor sanding. Who knew that so many people would be interested in watching a hard day's work instead?